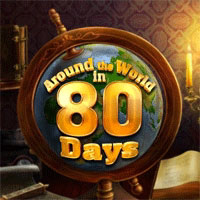 Around the World in 80 Days

Phileas Fog and his newly appointed French assistant Jean Passepartou accept the challenge to go around the world in 80 days and prepare to set off the very next day, Wednesday 2nd October 1872 at 8.45pm from London’s Reform Club on their legendary circumnavigation of the globe in the space of just 80 days. 141 years ago, their attempt to win a wager of an extraordinary £20,000.00 which is close to £1.5m or AU$2.6m in today’s money will see them on an adventure that will take them east through the Suez Canal and onwards through Egypt, across India by rail and elephant from Bombay to Calcutta, before boarding an ocean steamer to Japan via Hong Kong and then right across the Pacific Ocean, docking in San Francisco in time to board a string of trains all the way to New York before setting off on the final leg to return in London via Ireland.

Of course Jules Vernes story told in its fullest form is exciting and courageous, and honourable, and romantic, and dramatic, and dangerous, and well, fictional, but the journey is feasible if thwart with danger, local challenges, idiosyncrasies and many pitfalls along the way; and although Phileas did not realise it at the time, as he overlooked the crossing of the international dateline giving him a full days grace, he made the epic journey in 79 days and returned to the Reform Club the bachelor no more. Having rescued damsel Aouda, from the clutches of human sacrifice near Allahabad in India and marrying her on his return to London, the minister informs the marriage party that the date is in fact Friday 20th not Saturday 21st December as they had believed. With this thought firmly in mind they dash back to the Reform Club just in time to claim victory in the wager.

It is important to be prepared for any such a journey or undertaking, but equally it is wise and indeed important to be aware of some local customs and laws. A great source of information for any travel is www.smartraveller.gov.au and had Phileas had access to such a resource there is no doubt he would have found the information and advice not only helpful, but it could well have made his remarkable and exciting tale no more interesting than a weekend drive in the English countryside…. And if he were driving in the country he would need to know that A horn should not be sounded when stationary on a road at any time, other than at times of danger due to another vehicle on or near the road and of course he would be well aware that A man who feels compelled to urinate in public can do so only if he aims for his rear wheel and keeps his right hand on his vehicle.Upon arrival in Egypt he wouldn’t be interested that Families with only one son don't have to send him to the army, but if they have two or more sons they should be send to the army but not at the same time. But he would certainly do well to remember To dress modestly with your legs and upper arms covered taking care not to offend, and if in doubt to seek local advice as only 35 years earlier the Egyptian government Banned male belly-dancing in 1837 because of the enthusiastic riots that it caused.

Travelling overland in India and negotiating the seemingly unorganised and chaotic roads bristling with people vehicles and livestock, this expedition would do well to remember that Maiming or killing of a cow is an offence which can attract a punishment of up to five years imprisonment. My own experience and the quizzing of other local road users has highlighted one simple rule of the road that can be applied to travel in general, however you travel – Everything on the road that you can see has right of way, so give way to everything and sound your horn regularly to ensure everything has seen you. Then they can give way to you too….that’s why it looks mad but just works!With no real time to rest, hopping through Hong Kong it is best to remember that A betrayed wife is legally allowed to kill her adulterous husband, but may only do so with her bare hands preceding the visit to Japan that will be far less worrying and will even be uneventful as they don’t have any laws that can be seen as odd…unless you want to grab a few minutes relaxing in one of the many beautiful city parks as you will be moved on, pronto! You are not permitted to lay on the grass in public parks and this I guess makes sense if you imagine the 128 million inhabitants of these tiny islands jostling for a spot to spread out and work on their tans, blotting out any sign of the once lush green grass.

Great news then to be heading into the good ole USofA?!? Where normality comes in the shape of some of the most bizarre laws you can find and I could create endless lists, but I will share just a couple - in California It is illegal to set a mouse trap without a hunting license and in Florida An elephant tied to a parking meter must pay the regular parking fee, whereas in New York The penalty for jumping off a building is death!!So, rushing back to England on the way to the Reform Club, Phileas must certainly remember that in England, All men over the age of 14 must carry out two hours of longbow practice a day and It is an act of treason to place a postage stamp bearing the British monarch upside-down. Fact is stranger than fiction they say and this world can certainly feel strange and alien if you don't get out and experience everything travel has to offer....how many times can we go around the world in 80 days nowadays?!